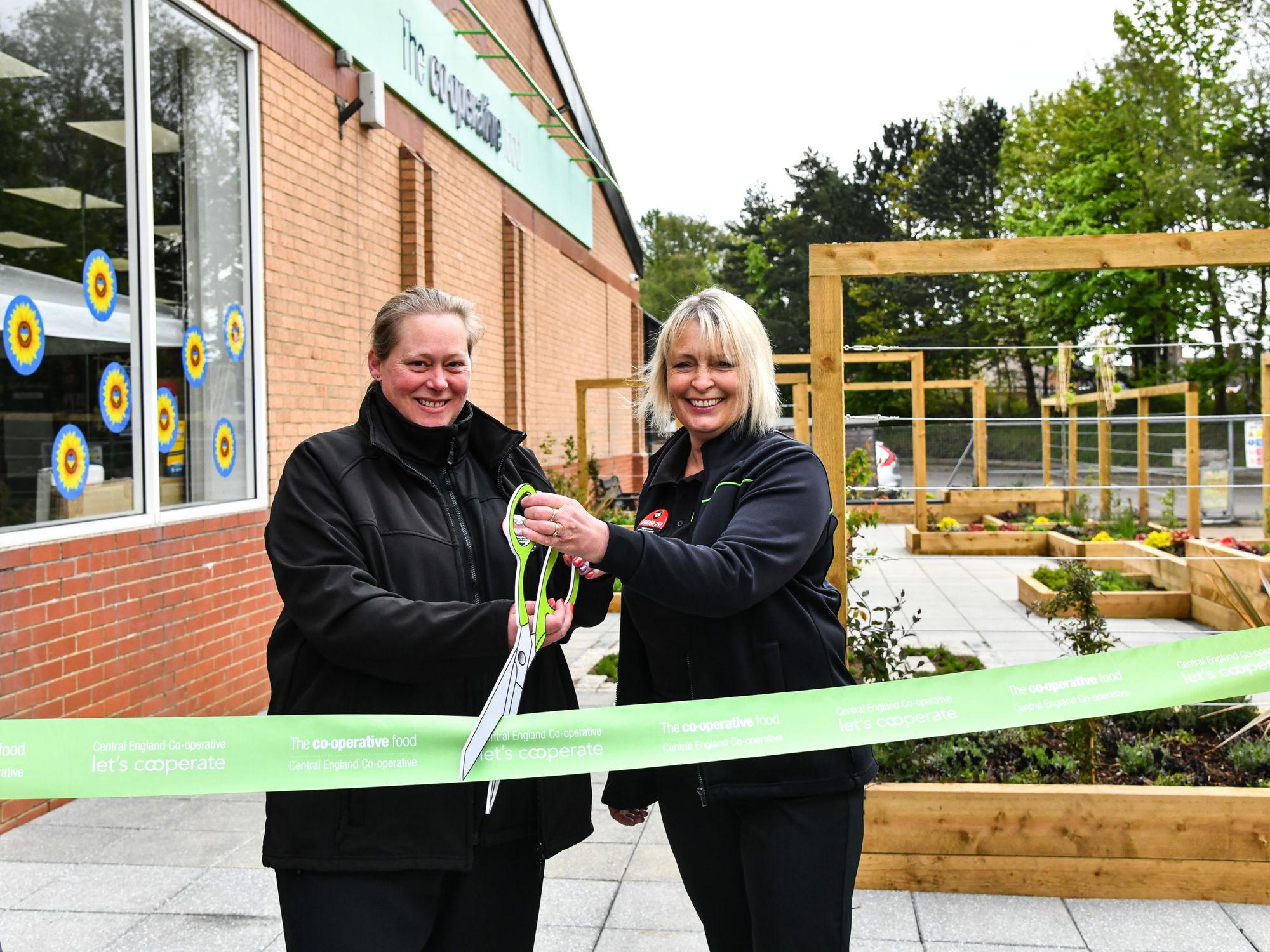 A Northamptonshire community now has a brand new green space for locals to enjoy as part of project led by Central England Co-op and funded by purchases of carrier bags in its stores.

It’s the second sustainable space to launch as part of a £350,000 project led by Central England Co-op in partnership with the charity Groundwork UK, with funding for the spaces coming from the Society’s carrier bag levy fund.

Schoolchildren from nearby Havelock Infants School attended the launch event to enjoy some activities in the brand new space and take away some seeds to plant back at school.

Also joining the fun on the day were residents from both Heather Holmes and Beech Close care homes and The Shed Desborough whose members built the bug hotels, bird boxes and the boot sculpture featured in the space, as well as Desborough in Bloom, who will be maintaining it going forward.

Donna Rood, manager of the Gladstone Street store, said it had been a real ‘community effort’ to transform the formerly empty and ‘unloved’ space.

She said: “It was such a pleasure to launch this wonderful new space at our Gladstone Street store by welcoming both young and old to enjoy this great new asset which has transformed an area that was previously rather unloved but now offers a peaceful and reflective area for locals to enjoy.

“It’s been a real community effort to bring this project to life, with such fantastic contributions by The Shed Desborough and we’re thrilled Desborough in Bloom have agreed to maintain the space. We’ve even had our neighbours at Desborough Fire Station helping to keep it watered ahead of the launch!

“It wouldn’t have been possible without Sam Tomkins, who is both a member of our Southern Member and Community Council (MCC) and a Customer Service Assistant here at Gladstone Street and a well-known face in the town.

“She is also part of Desborough in Bloom and so passionate about the community and today wouldn’t have been possible without her hard work and dedication to the project.”

Work on the sustainable space was carried out by contractors Trios Group, while Groundwork UK were on hand at the launch to talk to the schoolchildren and get them involved in some green-fingered activities.

Hannah Gallimore, Social Change Manager at Central England Co-op, said: “At Central England Co-op we’re committed to working with our communities to create a sustainable Society for all and our project with Groundwork UK will bring great benefits to those areas chosen and the people who live and work there.

“When we started this project, it was vital to us that the communities would be right at the heart of developing the kind of spaces they wanted to see and help maintain them going forward so they felt like they were ‘their’ spaces.

“To see local people and groups like The Shed Desborough so heavily involved in developing the space and that Desborough in Bloom will be maintaining it in the future has been such a joy and just what we envisaged for all the spaces being created.

“It’s also been great to see the food store, our members and funeral teams so central to the projects creation and launch, with special thanks to our Masonry team who produced specially inscribed paving stones that have taken pride of place in the space.”

Graham Duxbury, Groundwork’s UK Chief Executive, said: “I’m really excited that our partnership with Central England Co-op will make a major difference in local communities. By working together, we will be able to provide them with safe spaces that help people connect with nature and improve their health and wellbeing.”

The Desborough sustainable space is the second launched by Central England Co-op following the first at its Dodworth food store in Yorkshire in March, with more spaces set to launch later this year in Cambridgeshire and the West Midlands.