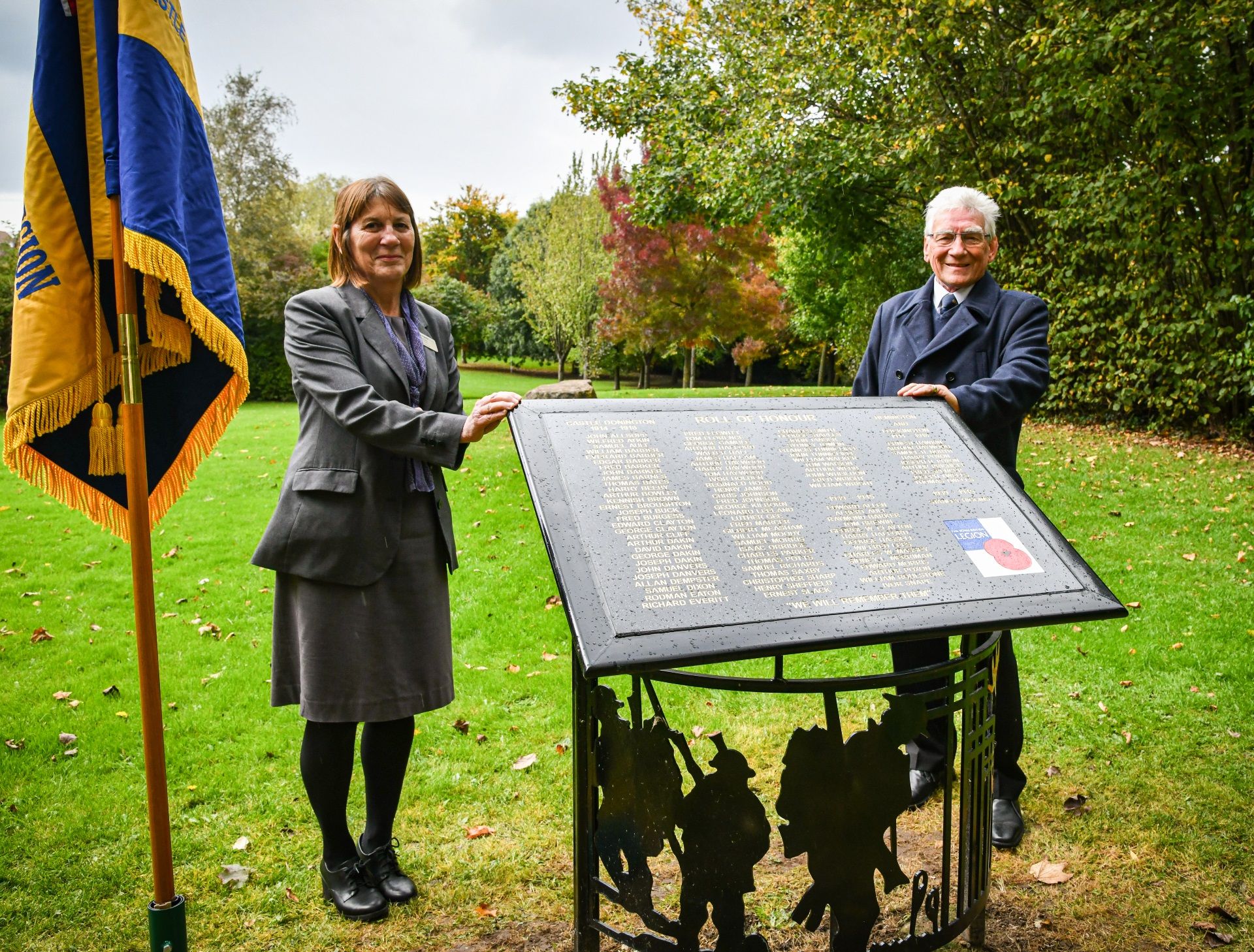 A memorial tablet with the names of dozens of locals killed in the first and second world wars has been installed at a Castle Donington park to complete a long-running project, thanks to funding from Central England Co-op Funeralcare.

The special tribute was installed during a small ceremony at Bentley Road Memorial Park in the Leicestershire town, the result of a collaboration between the Castle Donington & District branch of the Royal British Legion and ourselves.

The memorial tablet displays the names of all those brave men who lost their lives while fighting for their country from the Castle Donington, Hemington and Lockington areas.

The Bentley Road Memorial was started by the Parish Council in the early 1990s as a First World War Memorial to commemorate the fallen of that campaign, with a tree planted for every one of the Armed Forces from Castle Donington, Hemington and Lockington who did not return.

In recent times the Royal British Legion, in partnership with Fields in Trust, came together to make the memorial space a Centenary Fields Listed Site now protected for perpetuity as a green fields site.

In the last three years the Castle Donington branch of the Royal British Legion has laid a memorial stone with a plaque, funded and put in place a memorial bench and a lectern for locals to have quiet time and observe the memorial.

For Janet Morris, Funeral Administrator for Central England Co-op Funeralcare and a Castle Donington resident, it has been a personal mission to help get the memorial project completed with the names of the fallen, with two members of her own family featured on the tribute.

She said: “We first talked with the Royal British Legion about helping to produce the memorial tablet about two years ago to mark 100 years since the end of the First World War.

“We have fully funded the memorial tablet and our masonry team designed and created it. It has been a long process, but It is lovely to see the memorial tablet installed to complete the Bentley Road Memorial and especially poignant for me with having the names of two of my family members’ sacrifices marked.”

Janet is a member of the Society’s Member and Community Council (MCC) and was formerly based at its Borough Street Funeral Home before it relocated to the new Funeral Booking Office which is part of the Central England Co-op Supermarket site in Station Road.

She now works out of the Belton Street Funeral Home in Shepshed but remains passionate about her local community.

She said: “Living and working in Castle Donington I got involved in a lot of things in the local community and it is a great community to be involved with. Completing the war memorial with the memorial tablet has been a real passion for me so to see it come to fruition has been fantastic.”

Chairman of the Castle Donington & District branch of the Royal British Legion Michael Fox thanked Central England Co-op and Janet for helping to complete the special tribute to the areas’ war heroes.

He said: “The memorial tablet which has completed the memorial has been provided and fitted wholly by Central England Co-op Funeralcare and without its help the Branch would not have been able to complete this project.

“The Co-op and the people we have dealt with have been absolutely brilliant in offering to provide advice and fund this part of the project and without their help and expertise we would still be trying to arrange funding to complete the task.

“The Branch are grateful to the Co-op and in particular Janet, as well as the craftsmen who have produced the tablet for all their help, patience and guidance along the way. This tablet completes the Bentley Road Memorial and we are so proud to have it in our district; we cannot thank them enough for everything they have done for us.”