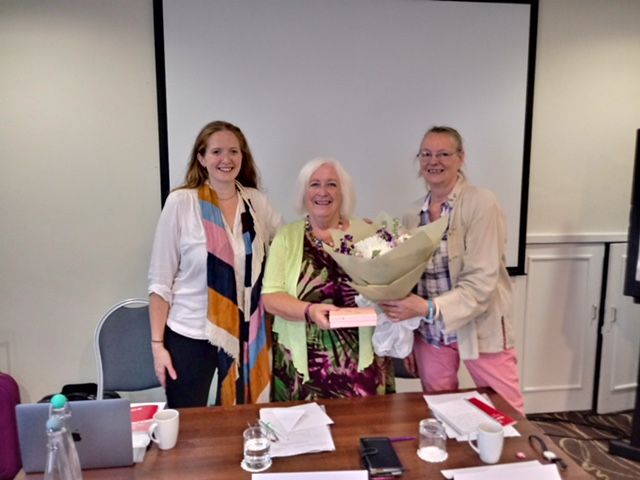 It has been a busy month yet again and I've been out and about meeting members and colleagues and representing the Society at events.

On June 21st we had the reconvened Press Board which passed off totally uneventfully and I was presented with a necklace, flowers and taken out for lunch as I take my 'good governance' year out from the board. I am not totally out of it though as I am now International Outreach Manager for Co-op Press principally tasked with increasing readership and membership in the USA

Co-op Congress commenced with a wonderful forum with Andy Burnham and Paul Gerrard on the Co-operative Commission for Manchester. I managed to persuade Andy to give quite a lengthy interview to Co-op News on the subject afterwards. Luckily I know him from my days on the board of Supporters Direct.

Then we had the Awards evening which we all feel we should have won given our superb membership engagement but the Group majored on their campaigning which is very good. But a great evening with true co-operators.

On the June 25th I led the Derby members' Educational Visit to Crosby Beach and Southport. The weather was terrible at Crosby Beach and no-one left the promenade to be photographed with one of Antony Gormley's statues as the rain was driving down. However, the sun shines on the righteous and it improved in Southport and members really enjoyed their time there.

On June 26th I was on a 90 minute phone conference for Co-op Group governance committee where I represent Co-op Press.

On June 27th  I led the Nemco & Ilkeston members' Educational Visit to Bourton on the Water and took the opportunity to visit the Midcounties fabulous flagship store there.

Despite it being my husband's birthday on 2nd July, I managed to get a pass out to the Retail Sales Conference event at Derby County FC.

This was brilliantly organised and stimulating with excellent mass involvement and afterwards a flood of tweets focussing especially on outdoor selling. I really enjoyed the day and felt inspired.

On July 5th I went to Manchester for the election hustings for President, Vice President and five senate seats of the Co-op Group.

Nick Crofts was re-elected President with 47 votes and Dan Crowe 38, David Bromilow 7. Unfortunately Dan was also unsuccessful in the Vice President election (which he previously held) losing out to Lesley Reznicek who is very good, That's democracy. So sad for Dan but it is winner takes all.

On July 9th & 10th I was privileged to attend the  Long Service Awards at beautiful Chatsworth House, the 'Palace of the Peak'. Both days were absolutely beautiful and we were lucky with the weather. Absolute credit to HR's Leanne Hicklin and Kellee Torr for the organisation. It is events like this that make me so proud to be President.

I also took Assistant Society Secretary Michael Tavener on an educational tour of Derbyshire. Culminating in a visit to the grave of the late Duchess of Devonshire (born Deborah Mitford) and the surprising grave next to it of Kathleen Kennedy, sister of JFK who visited on 29th June 1963 just six months before he was assassinated.

On July 11th  we had the Northern Region Member & Community Council meeting at Marehay near Ripley. We had some fantastic reports of work done over Co-operatives Fortnight.

July 15th back to the round of meetings with Remuneration, Rules & Practices and Pre-board.

I am also hosting two guests from Taipei in Taiwan for two weeks from 13th July.