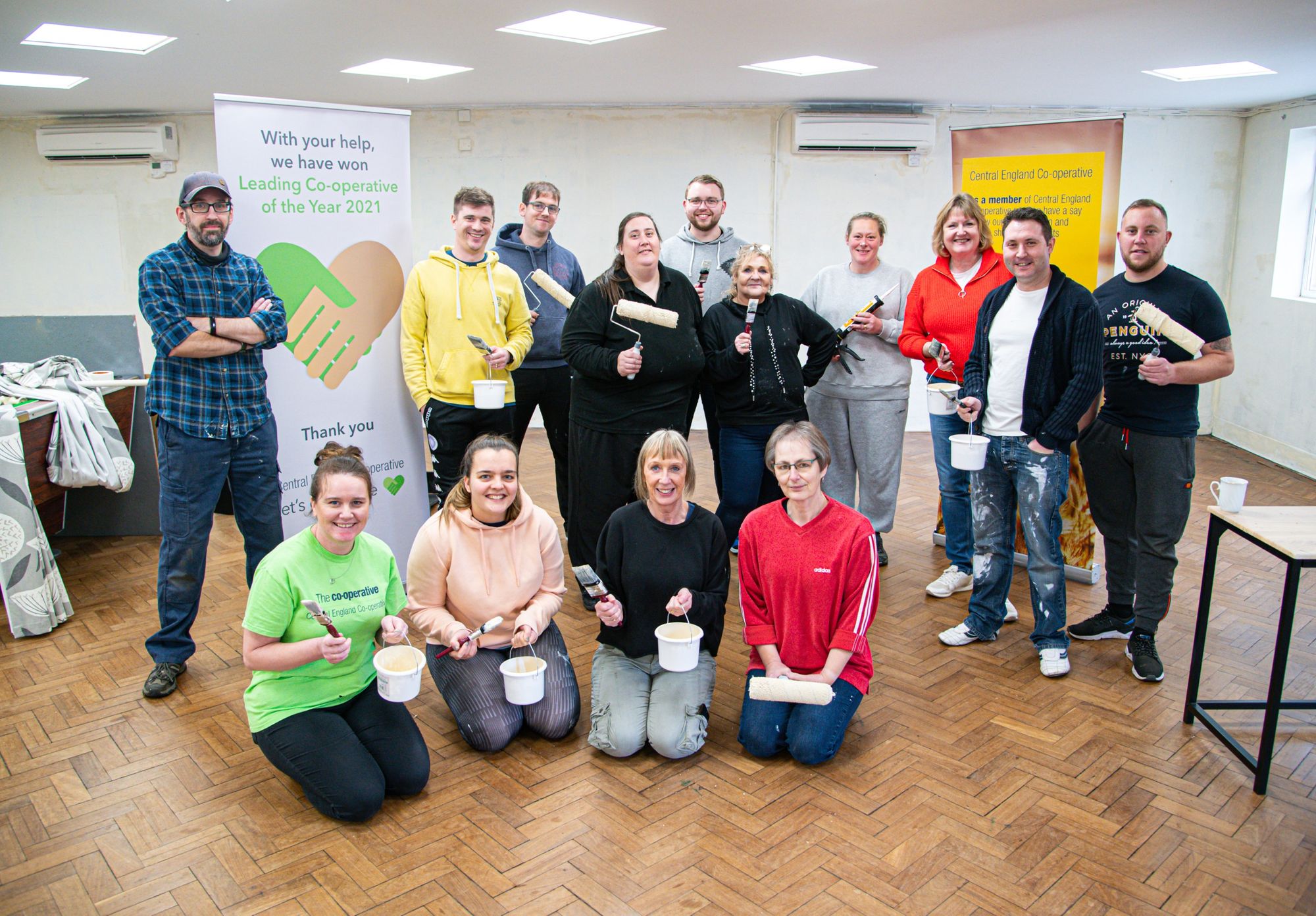 A team of colleagues from Central England Co-op have been helping to give a vital youth centre in Desborough a new lease of life by volunteering to give it a new lick of paint.

Colleagues from the Northamptonshire town’s food stores and funeral homes were among the band of volunteers giving up their time, as well as members of the area’s Membership and Community Council (MCC), the Society’s executive team and Board of Directors.

The Desborough Youth Centre is entirely self-funded through donations, grants and renting out the centre to other groups, and is run by a small group of volunteers.

The building itself is a valuable resource to the town; not only is a youth club ran from the building, but it is also used by an out-of-school club and a local dance school which both help them diversify their support for young people in the community.

Karen Bevan, Member and Community Relations Officer at Central England Co-op, organised the Society’s support and volunteered herself on the day.

She said: “It has been really rewarding for myself and the whole of the team from Central England Co-op to do our bit to help with this really vital project to help make improvements to Desborough Youth Centre which will have great benefits for the community and all the young people who use it.

“When I spoke with members of the committee and heard how they are completely self-funded and rely on volunteers to keep going it felt like a truly valuable project to support and very much in line with our co-operative values.

“It was great of our hardworking retail and funeral colleagues to give up their time to help, as well as our MCC members, Chief Technology Officer Liz Robson and Board Director Jody Meakin who all really enjoyed the day.

“We hope to do more in the future in partnership and following on from the painting day we will be donating some chairs and tables from our Business Support Centre to the youth centre.”

Many aspects of the youth centre building have come to their end of life or are overdue replacement or overhaul. Having the hall painted is giving an opportunity to replace some of the fittings such as new notice boards, cupboards and curtains.

The youth centre committee are now hoping to fund bigger projects including a complete overhaul and modernisation of the electrical system, replacement of old windows and a complete refit of the kitchen and toilets, plus a multitude of other smaller jobs and replacement of youth club equipment.

Charles Barrett, Vice-Chairman of Desborough Youth Centre Association, said the support from Central England Co-op had provided a timely boost and thanked the volunteers for their time and efforts.

He said: “The Desborough Youth Centre Association would like to thank Central England Co-operative and all their staff who came out to assist us giving the youth centre a lick of paint.

“The support and enthusiasm from all involved has been really heartening and has really given the centre a much-needed boost following opening up after the Covid shutdown. The youth centre now feels much fresher and brighter, but it has also given us the opportunity and incentive to refresh other elements of the building.

“The Co-operative movement has played a long and integral part in the history of Desborough, and we are delighted that Central England Co-op are keen to continue supporting projects like ours in the town.

“We look forward to being able to work with the Co-op again in the near future on other projects that will help the youth centre to improve the building and support youth services for the community.”

To become a member of Central England Co-op, visit https://membership.centralengland.coop/