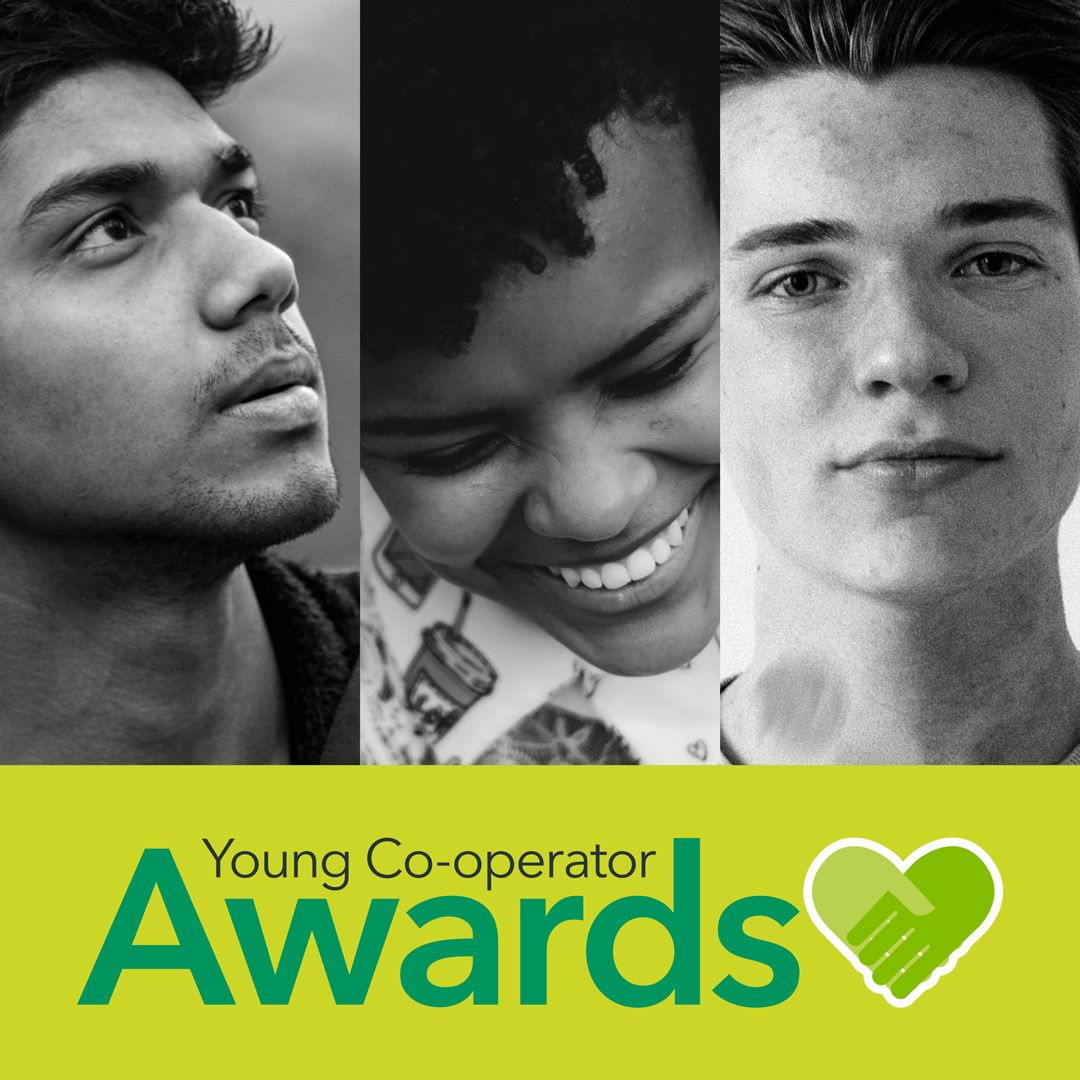 Amazing young people who have gone above and beyond for their local community during the last year have scooped a wide range of honours at the first ever Young Co-operator Awards.

We spent all summer searching for the best of the best across 10 categories who have excelled in everything from caring for others to reducing the impact on the local environment.

We were inundated with hundreds of entries from across our trading estate of young people aged from 0 to 17 who have all been a credit to their communities during the past 12 months.

Young Volunteer of the Year - Nuala Stone, 17, from Kettering

This award recognises a dedicated young volunteer who has shown outstanding commitment to their local community and contributed energy, skills and time.

Mum Jane Stone said: “Ever since I became a trustee at Kettering Foodbank, Nuala has helped to grow the Foodbank to what it is today. She began to learn how to make up food parcels and sort through donations and she would come to help us whenever she could at weekends and during school holidays. She doesn’t let her commitment to the Foodbank affect her school work and she has organised fundraisers and food drives within her sixth form in order to raise awareness. Nuala is a credit to Kettering Foodbank and she is definitely worthy of the Young Volunteer of the Year Award.”

This award is handed to someone who looks after a relative or loved one, putting another’s needs above their own

Joe’s mum Natalie Smith said: “He is no different to any other teen of his age in the things he likes to do, except he is because Joe is a young carer. Joe is one of three children and the eldest of my three sons. Joe is a carer for both of his younger siblings.

“His younger brother Luke is 13, he has a diagnosis of Autism which he received when he was three years old. During lockdown despite being classed as a vulnerable child due to his needs, Luke did not attend school. Joe supported his brother with his learning alongside me and also managed his own learning whilst at a crucial time in his own education. Then his youngest brother Oliver who also has a diagnosis of autism. He has severe learning disabilities and displays challenging behaviour. Oliver is very close to Joe often seeking him out to engage with and play with him. Joe is an advocate for his brothers often speaking including in school in front of peers about invisible disabilities and shared experiences we have faced as a family, to spread awareness and understanding of how actions of others impact the families around children with additional needs and disabilities. Joe puts the needs of his brothers above his own needs despite it being really hard, Joe hasn’t moaned about anything he just gets on with it, he is empathetic, loving, kind and gentle with his brothers and is a massive support to us as parents.”

This award highlights young people’s environmental achievements and inspiring others to help make a difference.

Jordan’s teacher Liz said: “Jordan is one of our Special Needs students whose barriers to learning include difficulties in processing language and he, therefore, struggles with communication and long term memory. Earlier this year, he applied for the ‘job’ of Gardening Assistant in school and has 'blossomed' beyond belief. He has amazed everyone who knows him! Under the direction of Mr Parkinson, the School Gardener, and abiding to safety rules due to the pandemic, he has undertaken every task given to him, going above and beyond, working tirelessly to help transform our dilapidated, old allotment into a thriving 'Ravenshall Gardens' for the benefit of so many students (and staff). It produces an array of fruit (planted historically but in desperate need of TLC) and vegetables that Jordan has helped to plant. His dedication and hard work have inspired others in his class to find opportunities to help around school. He is simply amazing and we are very, very proud of his commitment, dedication and full co-operation to benefit the environment and the school community. He has demonstrated exceptional learning despite everything! He IS our HERO!”

This award is handed to someone who has gone above and beyond the call of duty for the benefit of their local community.

Keanan Bartram, from Eyres Monsell Club for Young People, said: “Ellis has been an integral part of our organisation for many years now, typically volunteering within our youth club sessions. “However, the past year in particular has been a tough one for everyone. We had to close our youth club doors, and close all sessions due to the pandemic, but that didn’t mean we would close completely. Overnight, with the support of our volunteers, we turned our youth club around into a foodbank. Ellis was then committed to making a difference in our community. Along with the other volunteers, Ellis unloaded, packed and delivered food parcels to almost 100 residents a week. To date we have now provided over 9,500 food parcels, which is incredible for a small organisation like ours. Ellis is such a dedicated and enthusiastic member of our volunteering team, and we couldn’t have run this project effectively without him. He has such huge potential and we are proud to have him on our team.”

This category is for a young person who has exceeded academic expectations and achieved success in education.

Mum Suzanne said: “Olivia started a brand new school in April and is settling in so well and doing really well in her reading and writing. She is going above and beyond in all her subjects. She has moved up groups for all her subjects and her report said it all, the headmistress said we cannot wait to see more of Olivia next year. We are so proud of her, especially with the way the year has gone with Covid-19. She has really done us proud and gone above and beyond.”

This category is looking for someone who has accomplished something brilliant in the arts.

Dad Najaz Swift said: “Tariqa learnt about hand body art during the past year. She has only had a few people to work on due to covid but is looking forward to doing more out of lockdown and using her skills to raise money for charity. This award is a great pat on the back for a great and growing woman.”

This award highlights a young person who has shown leadership in his or her community in promoting mental health and/or mental illness awareness.

Nominator Leah Chapman, from charity E2, said: “Wow, that is fantastic news! Thanks again for choosing Javaise as a winner, it is definitely a good bit of news for such a deserving young person.

“We strongly believe that Javaise deserved to win this award, for giving up his own time in order to ensure that other young people benefit from support during tough times despite the hardships he faces in his own life. Javaise has shown us that he is vigilant by picking up on issues that arise such as bullying, being a great listener by offering support to young people with additional needs, as well as listening to them without any judgement. Javaise is also a very helpful, generous and kind-hearted young person. We work with many young people who have their own individual qualities, however Javaise is certainly a unique, hard-working and extremely deserving individual.”

This award rewards a young person for inspirational charity work and/or fund-raising.

Parent Ashley Hall said: “This is just such joyful news and Sebbie is delighted. He has gone way above and beyond by raising over £28,000 for children with disabilities in the lockdown through his Acts of Kindness campaign. When Sebbie was born, we were told he may never walk, talk or be able to live any form of healthy life. He has exceeded expectations and is a credit to himself, his family and the community.”

This award recognises children aged up to 11 who have shown courage and kindness beyond their age during the past year.

Dad James Butler said: “Thank you for the amazing news. Francesca is absolutely delighted to have won the award. She is really looking forward to receiving her trophy and is already planning to take it into her school to show off her achievement during the school’s assembly. Francesca decided to have her hair cut for the very first time during the pandemic to raise money for the Little Princess Trust (£645 which more than covers the cost of a wig for children suffering from illness that causes hair loss) and also donated her own hair in the process (17 inches!) which will also be used to make a wig!”

This has been awarded to Sebbie for his going remarkable lengths to help others lead their best life.

Winners will now become ambassadors who can work with the Co-op on exciting new community projects and products as well as receiving a trophy and an array of prizes and vouchers as a reward for their efforts.

Hannah Gallimore, Corporate Responsibility Manager, said: “We wanted to boost the reputation of co-ops with a younger, switched on audience and make the idea of our ethics and business model relevant and authentic for young people starting out in life, so they may choose to set up their own co-operatives or social enterprises in the future.

“Co-operation is a way of working and living which sees members have a real stake in their communities, through participation in local events and the distribution of profits back to where they were generated. We feel it’s a model which is particularly relevant now, as the value of sustainable communities to people’s lives has become so clear.”

“We have been amazed by the achievements of young people across all the categories and delighted to see how they have been putting co-operation into action in their local communities.

“We want to say a big thank you to everyone who entered and a massive well done to the winners who have gone above and beyond for their communities during the past year.”