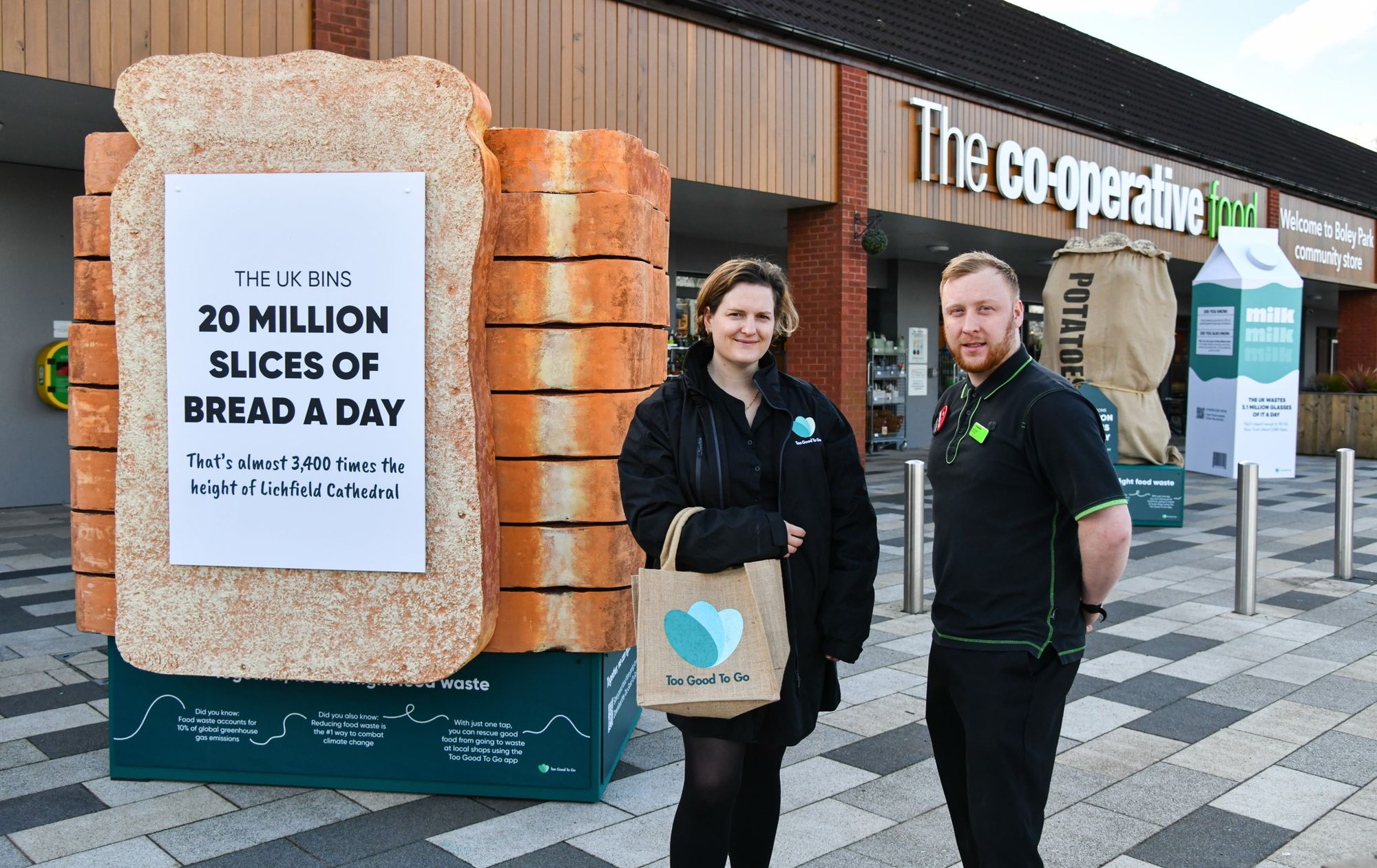 Shoppers visiting a Central England Co-op in Lichfield have been given a dramatic insight into the scale of the UK’s food waste problem as three giant sculptures of the UK’s most wasted food items were erected outside the store.

The retailer joined with surplus food app and social impact company, Too Good To Go, to erect the installations of a giant bag of potatoes, a carton of milk and a loaf of bread at the Boley Park store to mark Food Waste Action Week 2022 (7-13 March).

The majority, 4.5 million tonnes, is food that could have been eaten and is worth approximately £14 billion (or £60 a month for an average family with two children).

The installation at Boley Park aims to bring these shocking figures to life for shoppers and the sculptures also include locally significant messages to help people relate to the problem.

These include that the UK bins 20 million slices of bread a day - almost 3,400 times the height of Lichfield Cathedral.

The installation will be in place until the end of the month giving people plenty of time to visit and take a look for themselves.

Jamie Joyce, Store Manager at Boley Park Central England Co-op, said: “It’s been great to see the reaction of our shoppers to the installation which we’re delighted to be able to have outside the store to shine a light on the important issue of food waste.

“I think it’s really brought home to people the scale of the problem and got them talking about what we can all do to tackle how much food we waste.”

Jamie Crummie, Too Good To Go co-founder, said: “We’re delighted to have been able to work with CEC on this installation to raise awareness of the issue of food waste and its impact on our planet. Ultimately, the goal is to inspire action against food waste and to show how small changes really can add up to make a world of difference.

“It’s been fantastic to see the reaction to these sculptures already, as well as the conversations they’ve sparked about how we can tackle food waste better. I’m really looking forward to seeing this continue throughout the next few weeks.”

Central England Co-op has been working with Too Good To Go since last year at all of its over 260 food stores giving people the chance to buy surplus food and drink at a knockdown price to stop it from going to waste.

Customers and members with the Too Good To Go mobile app, which lists nearby businesses with unsold food, can find their local Central England Co-op store on the app and purchase a ‘Magic Bag’ priced at £4 which will contain at least £12 worth of food.